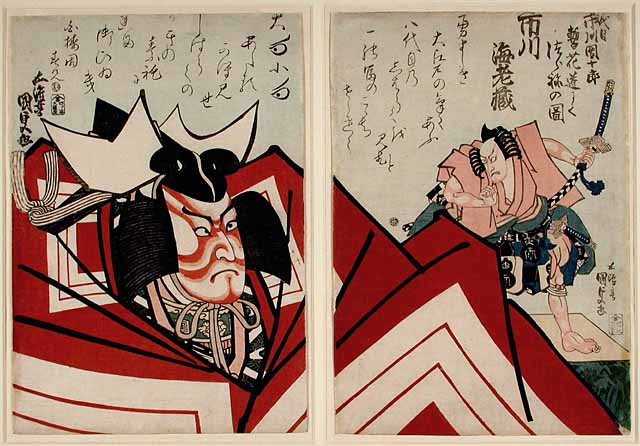 Ichikawa Danjuro VIII as Kamakura Gongoro in Shibaraku! (Stop Right There!) with Ichikawa Ebizo V (formerly Danjuro VII) in the background as the villain Narita Goro. circa .1836 Private collection

This diptych commemorates the debut of Danjuro VII’s eldest son in the central role of this play. The role is one of the great examples of the ‘rough-stuff’ style (aragoto) for which the Ichikawa line of actors was famous. Danjuro VIII is striking a defiant pose on the raised passageway (hanamichi) leading from the back of the theatre through the audience to the main stage, while his father, playing the role of the villain, looks on from the main stage. This is the great moment when Narita Goro, on the point of executing the innocent Yoshitsuna and his fiancee, is halted by the powerful voice of Gongoro coming from the rear of the theatre shouting ‘Shibaraku! Shibaraku!’ (‘Stop right there!’).

The hero then strides onto the hanamichi wearing the most extravagant aragoto costume: a voluminous suo (‘plain sliding-door’) robe, with the Danjuro mon adorning square sleeves so wide that they have to be supported with splints. Laudatory poems fill the space above the figures. This impression, the only known surviving example of this diptych, has faded: the thick cord around Danjuro VIII’s neck was originally bright red, and the thin cord was purple. 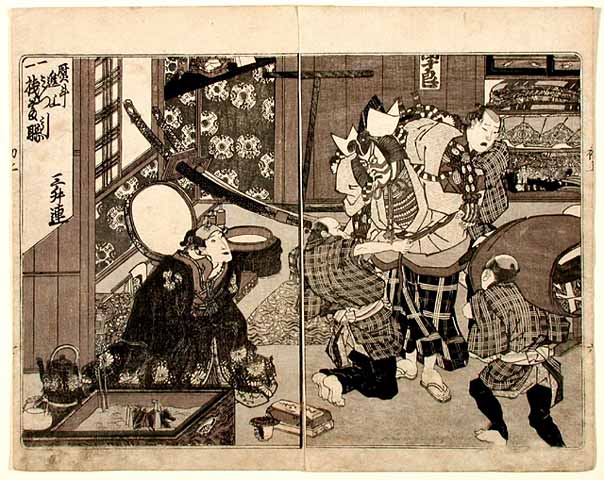 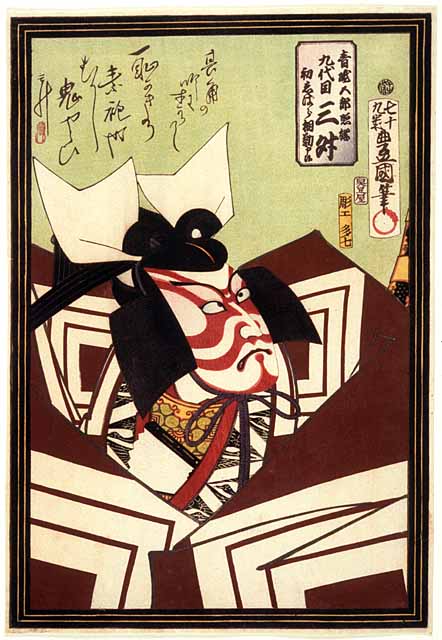 Published shortly before Kunisada’s death, this print is signed Shichijukyu-sai Toyokuni hitsu (‘from the brush of the seventy-nine-year-old Toyokuni’). A poem in the actor’s own hand is printed at top left, signed with his poetry name, Sansho.

Kunisada had depicted successive generations of the Ichikawa lineage of actors in the role of Gongoro in Shibaraku!, which was one of the great examples of the ‘rough-stuff’ style (aragoto) for which the Ichikawa line of actors was famous. All of Kunisada’s prints depict the moment of the character’s entrance, one of the highpoints of all kabuki. Narita Goro is on the point of executing the innocent Yoshitsuna and his fiancee, when the voice of Gongoro comes from the rear of the theatre shouting ‘Shibaraku! Shibaraku!’ (‘Stop right there!’). The hero then strides onto the hanamichi passageway leading through the audience, wearing the most extravagant costume: a voluminous suo (‘plain sliding-door’) robe, with the Ichikawa crest (mon) of triple-rice-measures (mimasu) adorning square sleeves so wide that they have to be supported with splints.