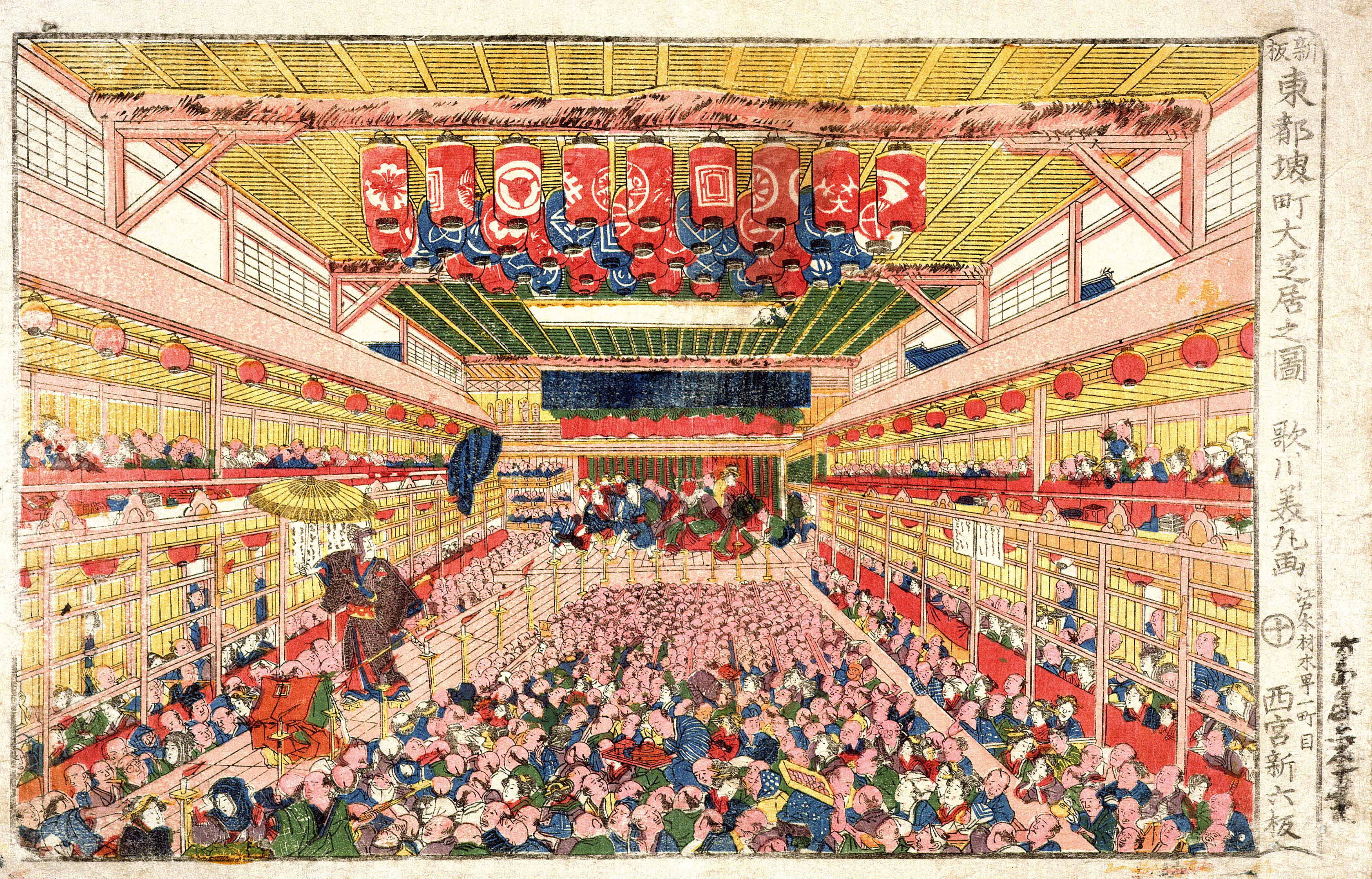 ‘Newly printed picture of the Great [Nakamura] Theatre of Sakai-cho in the Eastern Capital [Edo]’ by Utagawa Yoshimaru c. 1830s.

This print published by Nishinomiya Shinroku shows the interior of the Nakamura Theatre in Sakai Street before the fire in 1841 that destroyed it and resulted in a move to Sarukawa Street.

We are at the back of the theatre in the rear raised gallery (sajiki) looking towards the main stage at the far end. Danjuro VII as Sukeroku (wearing the characteristic purple headband and carrying an umbrella), makes his entrance along the hon hanamichi (literally ‘main flower path’) on the left-hand side a raised walkway that passes through the audience from the kirimaku curtain at the back to the main stage (a subsidiary or kari hanamichi is on the other side of the auditorium). The action is frozen on the main stage to focus attention on Danjuro.

In front of him crouches a stage-hand (koken) holding a candle to illuminate the actor. Stage-hands usually wear discreet black clothing but for special performances more elaborate costume is worn: in this instance the costume is decorated on the back with Danjuro’s acting crest (mon), the triple-rice measure box (mimasu). Other candles are lined up along the hanamichi and across the front of the stage, but the main light-source is daylight, coming through the high windows at the sides and also from the roof light.

Music and sound effects emanate from the geza a lattice-screened room on the right of the stage, while for some performances (those plays deriving from the puppet theatre) music comes from the chobo yuka a lattice-screened booth above the stage-entrance on the right of the stage. The curtain of the main stage is pulled aside to the left. Above the stage is the tsurieda (hanging branches) a border of artificial branches or flowers. The line of a circular revolve (mawari butai), added to the Nakamura Theatre in 1793, can be seen on the floorboards of the stage. From the ceiling of the auditorium hang lanterns bearing the actors’ crests (mon), with Danjuro’s mimasu particularly prominent. His crest is seen again on the headscarf of one of his fans in the groundlings or doma (‘earth space’) at lower right.

Vendors of snacks and tea make their way through the doma, which is divided by wooden railings into partitioned boxes or masu (‘rice-measure box’) each seating six or seven people. Those masu closer to the stage are more expensive, while the most expensive are those on the takadoma (‘raised ground space’), a raised area round the edges of the hiradoma (‘level ground space’) introduced when the Nakamura was reconstructed in 1802. More expensive still are the two-storey galleries (sajiki) raised up along the east (right) and west (left) sides. The best seats are those nearest the stage on the upper gallery (nikai sajiki); a ledge in front of this gallery accommodates food boxes.

The lower gallery is called the ‘quail’ or uzura sajiki, because it resembles a birdcage. With the exception of the people peeping in through the roof light in this print, those with the cheapest view are in the two-storey rakan-dai (‘Buddha’s 500 disciples’ enclosure) behind the stage at the left, from where they can see only the actors’ backs (the enclosure got its name from the similarity to an array of Buddhist statues).

Hanging either side of the main auditorium are announcements concerning the behaviour of the audience.