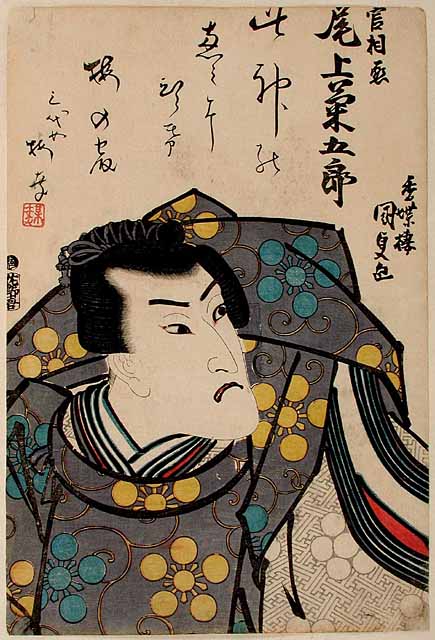 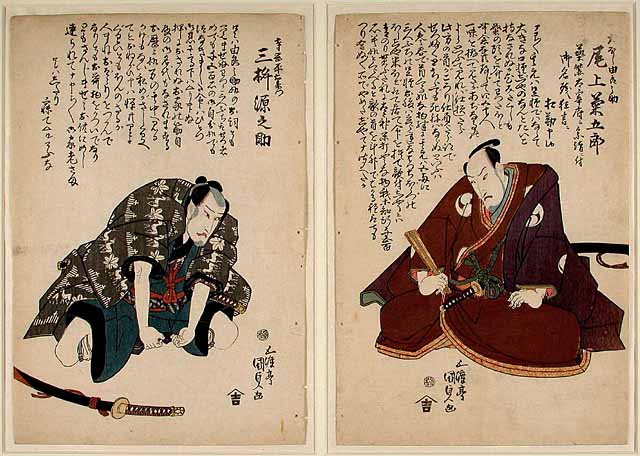 In Act VII of this famous play about the revenge of the forty-seven samurai, the leader of the band, Yuranosuke, is found playing the profligate in a brothel in order to deceive his enemy’s spies. In the scene depicted here, Heiemon, a foot soldier in the service of their deceased master, approaches Yuranosuke and asks to be allowed to join in his plot against the powerful courtier who was responsible for their master’s downfall. Yuranosuke denies the existence of any such plot and claims he is under no obligation to avenge their master’s disgrace and death. Heiemon remonstrates with him but Yuranosuke pretends to fall asleep. Their dialogue is inscribed on the print. Yuranosuke eventually led his fellow samurai against their common enemy and they succeeded in killing him. They all then committed suicide. 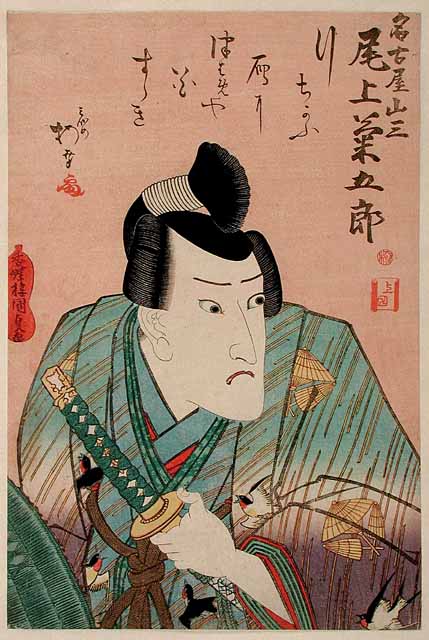 This pair of portraits commemorates a revival (with a different name) of the play that brought Danjuro VII (now acting as Ebizo V) and Kikugoro III together in these highly successful roles. The well-known rivalry between the two actors added spice to their confrontation in this famous ‘Scabbards clashing’ (Saya-ate) scene in the third act, which had featured in prints associated with earlier productions. Fuwa Banzaemon carries a sword named ‘Thunder’ and wears a kimono decorated with a pattern of ‘lightning-in-the-clouds’. His rival Nagoya Sanza carries a sword named ‘Amorous Swallows’ and wears a kimono with a ‘swallows-in-the-rain’ pattern tied with a sash of knitted rope. Unaware of each other, they make simultaneous entrances boasting of their fame, along the two raised passageways (hanamichi) that run through the audience to the main stage. As they pass on the main stage, which represents Nakano Street in the Yoshiwara pleasure district at cherry blossom time, their sword hilts clash. They exchange insults, remove their green sedge travelling-hats, recognize one another and draw swords to fight over the courtesan Katsuragi, whom they both love.

Above the actors’ heads are hokku poems (haiku) written by the actors themselves. Danjuro’s poem is signed with his poetry name Hakuen. It alludes to his repeated appearances in this role and to the lightning-in-the-clouds pattern on his robe, as well as to the date of this performance in the ninth month.

Kikugoro’s poem is signed with his poetry name Baiko. As well as alluding to the swallows-in the-rain pattern on his robes, the poem suggests a comparison between the action in this scene when the actors pass each other on stage, and geese and swallows flying past each other as one arrives and the other departs in the autumn, the season of this performance:

Given by the Friends of the Fitzwilliam with the aid of the MGC Purchase Grant Fund and the National Art Collections Fund (P.88-1999)

From the series Tosei mitate sanju-rokkasen (Comparison of roles with the thirty-six flowers at their zenith).

Seki Sanjuro as Tamasho (right), Onoe Kikugoro III as Hikoso (centre) and Segawa Kikunojo V as Kokin (left), in Hana-gumori sato no geta-kasa (Clogs and umbrellas in Yoshiwara on a cloudy day amidst cherry blossoms) performed at the Nakamura Theatre in 03/1824

This triptych captures the interplay between the three characters at a climactic moment in the play. The text around them records their dialogue in the scene, revealing that the geisha Kokin and her lover Hikoso are making their escape from the licensed quarters. Tamasho tries to dissuade couple from taking such a tragic course of action. In the mid 1820s there was a brief vogue for filling the background of half-length and full-figure actor portraits with extended texts (see also the diptych included in this exhibition). This device was derived from inexpensive, illustrated popular novels, in which text filled all the space around the figures. Kunisada was an experienced illustrator of such novels and often drew the characters with actors’ features. ) 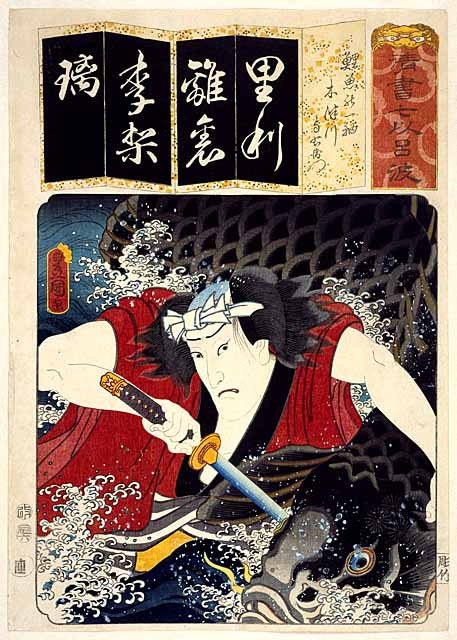 A posthumous portrait of Onoe Baiju (a name used by Onoe Kikugoro III in retirement) as Rokusaburo the carpenter with a giant carp, from the series Kiyogaki nanatsu iroha (Neatly Written Syllabary in the Seven Styles). On the folding screen at the top the character for the syllable ‘Ri’ is written out in four different ways with different meanings, and also appears in a poem by Kizugawa Yoemon; one of the possible meanings is ‘carp’.

Rokusaburo is the main character in the play Mijikayo ukina no chirashigaki, set in the timber yards of Fukugawa. The scene depicted is a ‘carp-grappling scene’ (koitsukami), which originated in the type of summer play (natsu kyogen) known as mizu kyogen (‘water play’), using tanks of real water (honmizu) on stage. Plays with carp-grappling scenes (koitsukami mono) involved the hero in underwater combat with the spirit of a giant carp (an elaborate prop). The technique was passed down through the Onoe lineage of actors to Kikugoro III, who made the scene famous in Kijikayo ukina no chirashigaki when it was premiered in 1813 and commemorated in an earlier print by Kunisada. In this print, the spray is achieved by splashing the surface with white pigment.