Prints of other (non actor) surimono by Kunisada 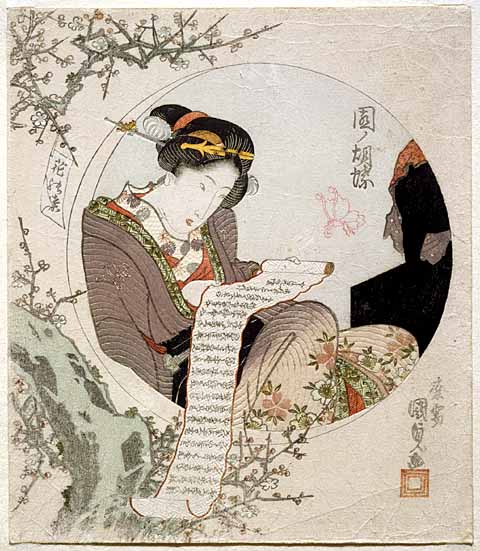 Hana no cho (Butterfly on the flowers)

A surimono made for the song Hana no cho by Sono no Kocho, probably identifiable with the kyoka poet Ryuotei Edo no Hananari who commissioned other surimono with the kocho (buttterfly) seal found on this print (see also the surimono entitled Flower). Kocho (butterfly) was the symbol and possibly also the name of the poetry club to which he belonged.

This is one of many prints showing a geisha reading a love letter. The quality and design of the scroll shows that the woman’s admirer was anxious to appear rich, and his letter boasts of being literate in both Japanese and Chinese. He assures her of his love, heedless of the misfortune predicted by fortune-tellers and the fear of becoming the talk of the town.

Nothing, he concludes, can prevent the two of them, he the butterfly and she the flower, from coming together, despite the many hedges between them. The artist suggests her acquiescence by the butterflies on her pin and her kimono. The detail of the scroll is remarkable; and one character was amended after printing with a tiny piece of paper stuck over the top Kunisada’s sada seal here takes the form of the mimasu (triple rice measure), which was the Ichikawa family of actors’ crest (mon). 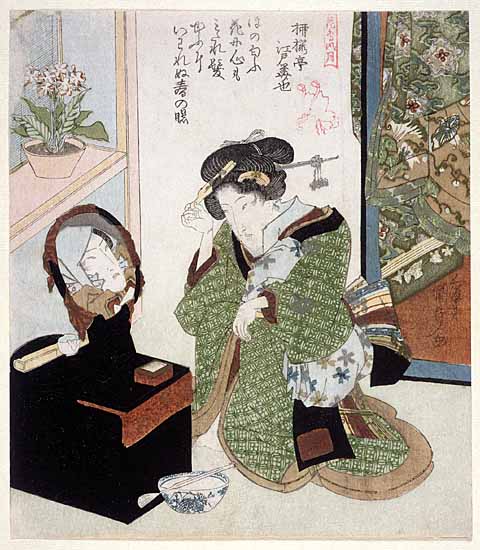 This is the ‘Flower’ print from a series of surimono titled Kacho-fugetsu (Flower and bird, wind and moon). The butterfly is the seal of the kyoka circle associated with the poet Ryuotei Edo no Hananari, who commissioned the print (the print was also issued without the seal). The woman imagines that she sees the face of her lover, whom she is longing to meet, appear in her mirror. She is holding a folded yukata and may be about to go to the bath-house. The ‘Wind’ print from the series shows a courtesan awaiting her patron.The poem by Ryuotei Edo no Hananari reads:

By a subtle fragrance of flowers, my heart is so distracted and scattered,
like dishevelled hair it is impossible to fix - the dawn in spring is so enchanting and impossible to describe. 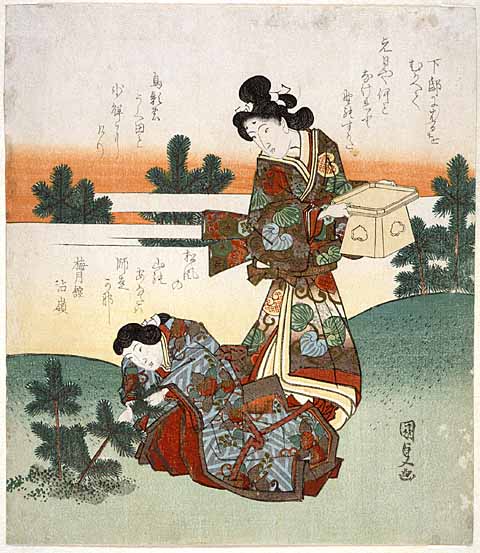 This surimono depicts women of a samurai (feudal lord) household in the New Year custom of Komatsu-biki (Picking pine saplings for the New Year festival), or Ne no hi asobi (Outing on First Rat Day of New Year). The title refers to the three houses that a feudal lord was required by feudal law to keep in Edo (a mansion in the city for himself and his regional estate business; a mansion for the permanent residence of his family; and a suburban retreat in case of one of the fires that frequently swept the tinderbox city). The three poems, which are haiku rather than kyoka, are written by a poet, Baigetsukan Senrei, who may himself have been a high-ranking person or feudal lord. 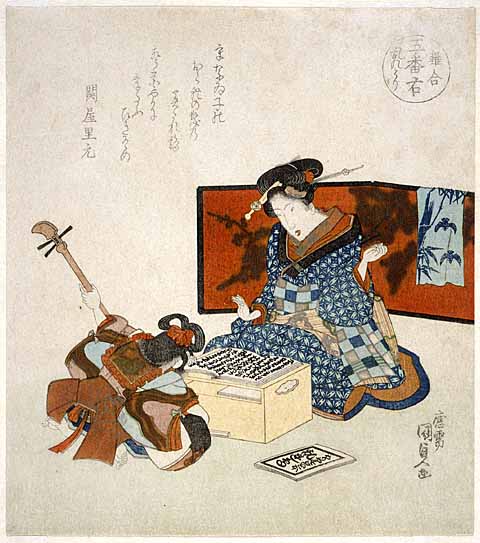 From the series of fifteen Spring kyoka surimono entitled Tori-awase (A contest of fowls), commissioned by the Taiko poetry group for the year of the cock. The series involved pictorial puns on the name of varieties of birds. It was unusual in that it consisted of six pairs of prints (right and left) designed by Shinsai and Kunisada, and a triptych by Hokkei. The pair to this print has not been identified. ‘Mixed cock-crows’ (midare-dori) was a poetic term expressing a time late in the dawn; it is also the title on the cover of the Meriyasu keiko-bon (instruction manual for popular ballads) which the young girl is using for her shamisen lesson. She is dressed up in a new kimono and with her hair arranged for the first music lesson of the New Year. Music was often taught by female instructors, particularly popular music. 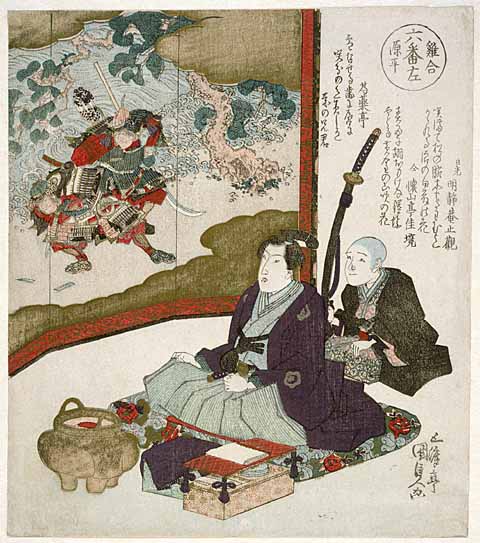 From the series of fifteen Spring kyoka surimono entitled Niwatori-awase (A contest of fowls), commissioned by the Taiko poetry group for the year of the cock.

A young samurai (feudal lord) and attendant are depicted in front of a screen on which is painted the famous Shikoro biki (armour-pulling) incident from the Battle of Yashima, involving Minonoya Shiro and Kagekiyo, two of the leading warriors from the Gempei wars. Many of the Kabuki plays featuring the character Kagekiyo included a shikoro biki (armour-pulling) scene. 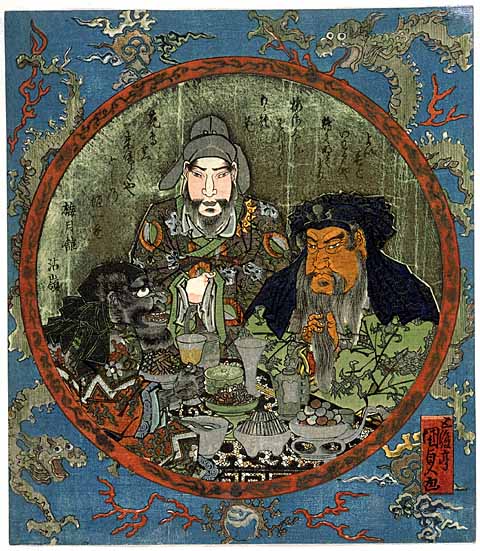 Three heroes of the kingdom of Shu

This surimono depicts Guan Yu, Liu Bei and Zhang Fei, who were known as Shoku sanketsu - the three heroes of the Chinese kingdom of Shu (modern Szechuan Province) in the 4th century a.d. Their tale was best known through the Chinese novel Romance of the three kingdoms, which was introduced into Japan in the early Edo period and remains popular today. They were usually depicted in the famous scene when they exchanged oaths of brotherhood while drinking wine in a peach orchard. Their appearance on New Year surimono was usually combined with poems linking their attributes to conventional phrases and epithets for spring. One of the poems on this print likens the seasonal plum, cherry and peach to the ‘three brothers’. The second poem makes reference to the incident in the legend of Ama no iwato when the cock crowed to lure the sun goddess Amaterasu out of the cave where she was hiding and thereby casting darkness over the world. The print was probably designed for spring in the year of the cock 1825.

The cherry orchard scene was so well-known that it was often parodied in prints.