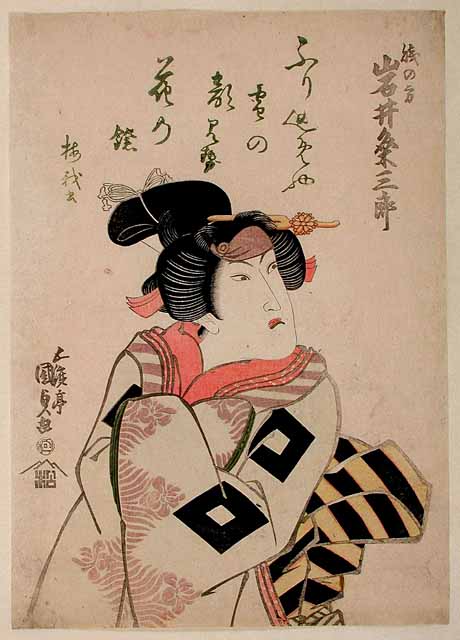 Four prints from the series are displayed here, only two of which are known in other impressions. These were Kunisada’s first oban (standard-format) half-length portraits for four years, with the exception of fan portraits. In each print in this series, the subtlety of the printing in relation to the design is evident in the use of diluted black ink for the calligraphic strokes that define the kimono and sash as well as the actor’s name and role, the artist’s signature, the censor’s seal and the publisher’s mark. As an added refinement, the poem in the actor’s own hand is printed in colour set off by the delicate pink ground. This was the first time that a poem by the featured actor had been included on commercially issued actor-portraits. Such poems became a standard feature of Kunisada’s half-length actor portraits, and are found on 110 of the 200 portraits issued between 1820 and 1840 (although they are never encountered on commercially issued full-figure actor prints).

The Saruwaka in the title of the play is Saruwaka Kanzaburo, who was given official permission by the Shogun to open the Saruwaka Theatre (later renamed Nakamura when the family name changed), the first Kabuki theatre in Edo. The title thereby associates this performance with the Nakamura theatre. The ‘gourd-crest’ in the title belonged to the great warlord Hideyoshi, an indication that the play was one of the Taikoki mono (plays about the taiko), telling the story of the sixteenth-century warlord Hideyoshi, but with changed names. The identity of such historical characters was disguised to avoid infringing the ban on their portrayal on stage or in prints. 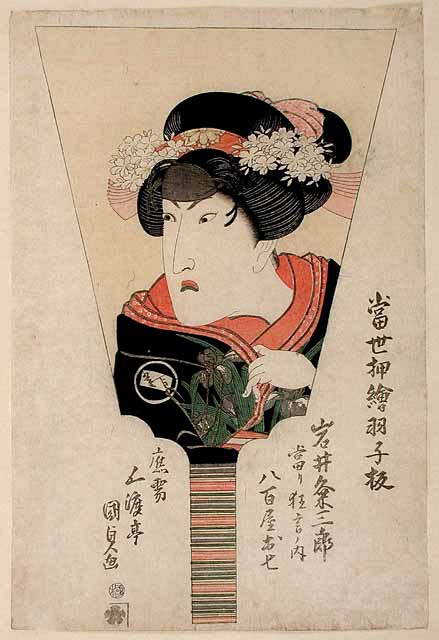 From the set of nine designs entitled ‘Modern cloth-picture battledores stage hits’ (Tosei oshi-e hagoita atari kyogen no uchii). The title refers to battledores that were often elaborately decorated, sometimes with images made out of pieces of cut coloured-cloth. The format had been used previously for actor-prints, most recently by Kunisada’s master Toyokuni. In this set Kunisada depicted the leading actors of the early 1820s in their greatest recent hits. Kumesaburo had appeared as Yaoya Oshichi in the play Fujibumi medetaku Kashiku (The Sealed-letter crest and the auspicious farewell of Kashiku) in 01/1816.

He wears the fujibumi crest (an envelope within a circle) of Arashi Kiyosaburo II who was so successful in this role in the early 18th century that subsequent actors playing the part all wore the crest, which became identified as that of Oshichi.The role was a type of strong-willed Edo woman, and was based on an actual incident in 1681 when the real Oshichi fell in love with a young priest whom she met at his temple while seeking shelter from a large fire. Hoping to see him again, she set fire to her own home, causing a massive blaze that led to her execution for arson. In the play her lover is Kichisa, and she raises a fire alarm by beating a drum, knowing that the penalty for raising a false alarm is death by immolation. 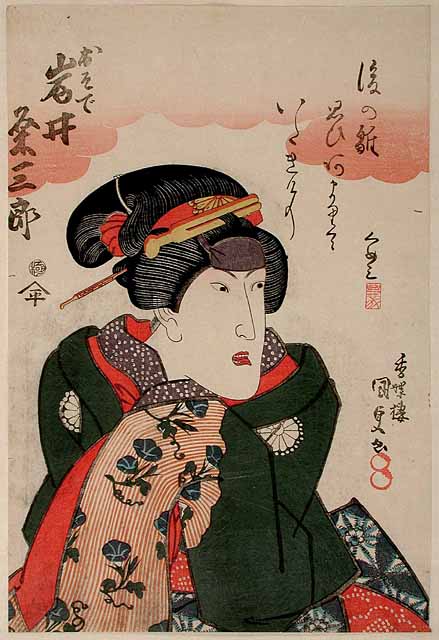 From an untitled set containing at least eight designs, with poems across the top written out in the hand of the individual actor. The prints in the series relate to a variety of plays. These two prints depict characters from one of numerous plays that conflated the plots of two well-established plays (Igagoe Norikake Gappa and Igagoe docho sugoroku) on the theme of the Iga revenge (Igagoe mono). Along with Soga plays and Chushingura, this was the third of the three great revenge stories of Kabuki drama. The plot derived from the true story of a swordsman who took revenge on behalf of his brother-in-law by killing the murderer Matagoro at a crossroads in Iga Ueno in 1634. This play involves the efforts of Karaki Masaemon and his brother-in-law Wada Shizuma to catch up with the villainous Matagoro, who has murdered Shizuma’s father Yukie. Osode the tea-shop girl is betrothed to Matagoro, whom she has never seen, but falls in love with Shizuma, who passes himself off as Matagoro. She helps him reach the house of her father, Yamada Kobei. It is not certain whether these two prints form a pair to show the characters in the same scene.

All men in Japan at this time were required to shave the tops of their heads, so Matagoro’s full head of hair indicates his outlaw status. 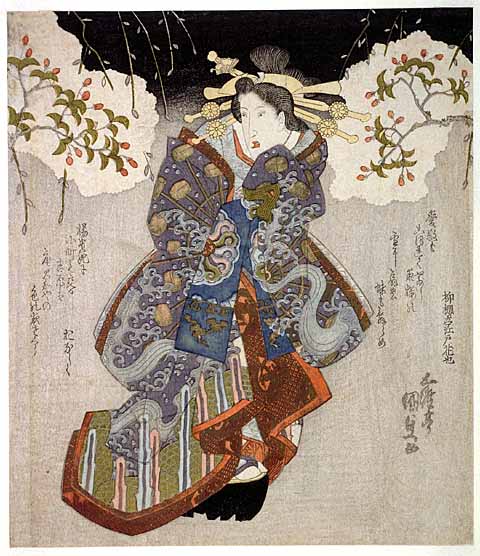 Iwai Kumesaburo II as a courtesan

In this surimono, the courtesan stands beneath a night flowering cherry in Yoshiwara, the licensed district in Edo, wearing a robe patterned with water-wheels, gabions and stakes. The poem by Ryuotei Edo no Hananari praises her beauty by combining references to two famous Chinese and Japanese beauties from the past, Yang Kuei-fei and Ono no Komachi. There is a pun on the word Karayamatoya (China-Japan house) because it incorporates Yamatoya, which was the actor Kumesaburos yago (shop name), the nick-name shouted out by fans to encourage him during a performance. The actors fan-butterfly (ogi-cho) crest (mon) forms part of the design of the hairpins. The iris pattern on the robe was also associated with Kumesaburo. 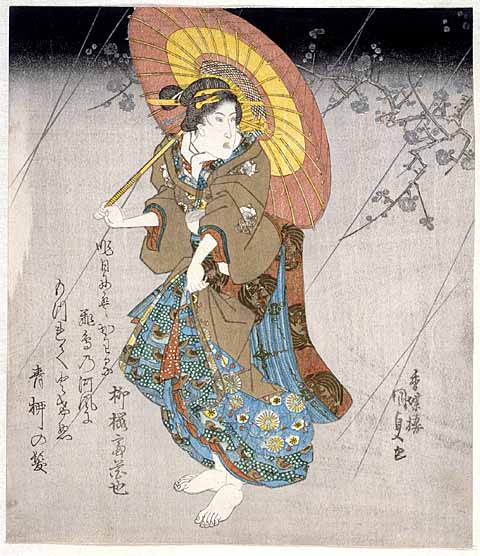 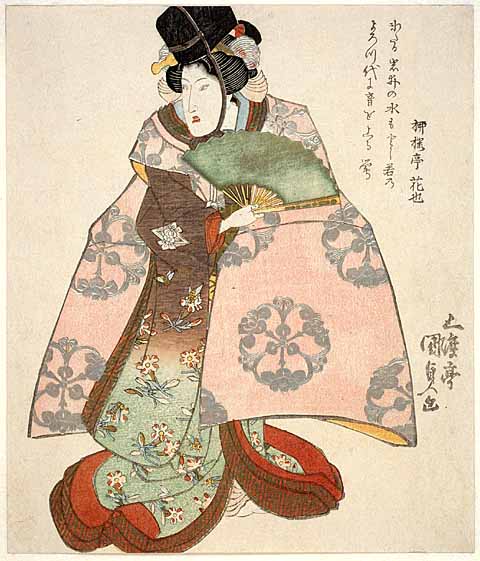 Iwai Kumesaburo II in the role of a shirabyoshi dancer

In this surimono the actor wears a long-sleeved kimono (furisode) patterned with flowers and wasps and bearing the actor’s crest (mon). The pink court robe has a stylised, linked iris pattern in silver, which was also associated with Kumesaburo. The poet Ryuotei Edo no Hananari who commissioned this print also commissioned another surimono from Kunisada of this actor. A number of Kabuki plays involved shirabyoshi (white rhythm) dances, which were performed to a rhythmic accompaniment with changes of costume, bun-shaped hats and fans. The most notable characters who performed shirabyoshi dances were Hanako in the dance-drama Musume dojoji, and Shizuka Gozen, mistress of Yoshitsune, in numerous plays. 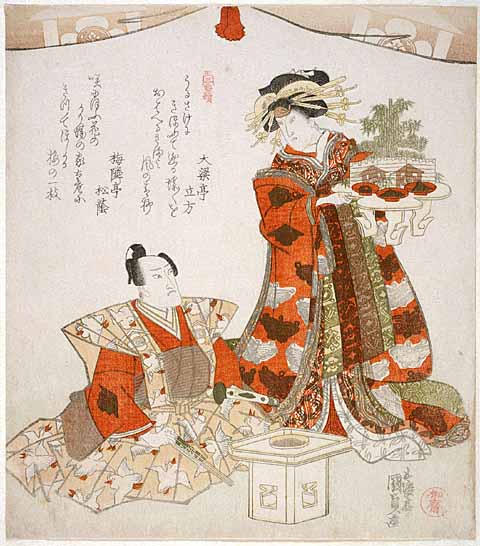 From a set of five surimono commissioned for the Hisakataya poetry group whose emblem, a stylised koto bridge, surmounts the red inscription: Goban-tsusuki (from a set of five). The printer’s seal of Ryusai Chimata (Ino Naojiro) also appears on the print. The set depicts characters from the cycle of plays telling of the revenge of the two Soga brothers, Soga no Juro and Soga no Goro, on their father’s murderer Kudo Suketsune.

The Iori-mokko motif (a magnolia within a stylised hut) associated with Kudo Suketsune decorates the curtain looped across the top of all five prints in the series. It also occurs on the curtain on the Shimadai (island tray) decoration held by Oiso no Tora in this print. The motif alludes to Suketsune’s hunting lodge at Susono below Mount Fuji, where he was finally murdered by the Soga brothers. Soga no Juro’s costume bears the pattern of flying-plovers (chidori) that was traditionally associated with him, while his sleeve is decorated with the Yamagata-mokko motif of Soga. His mistress Tora’s costume is decorated with a Soga butterfly motif, which was also associated with the actor Kumesaburo 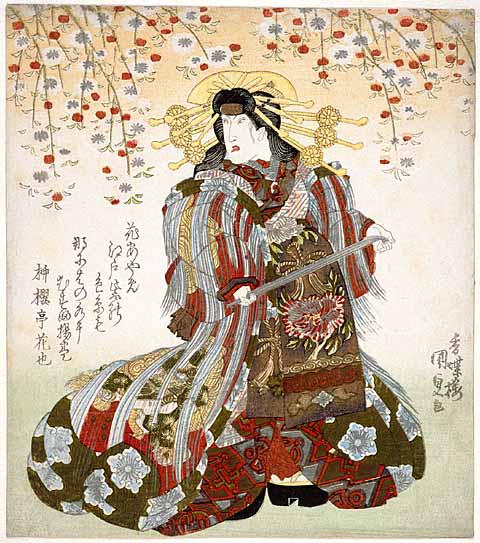 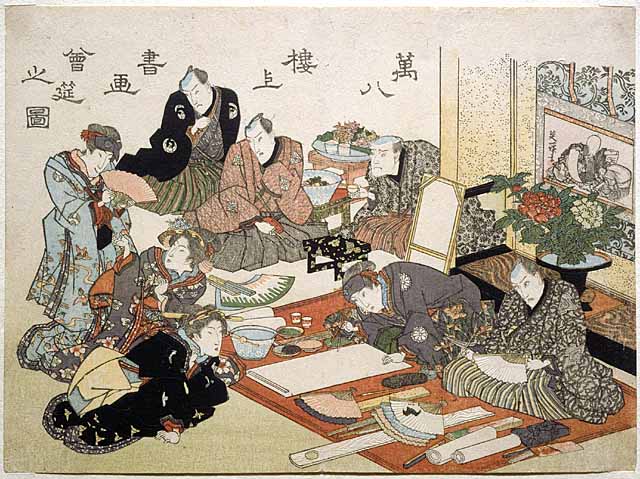